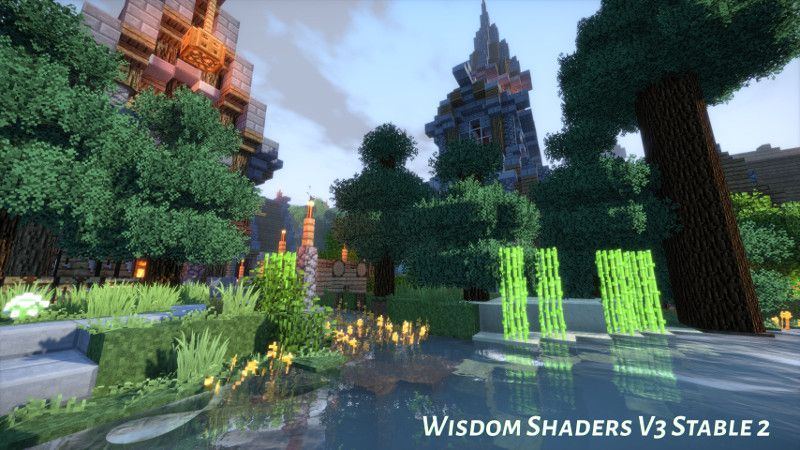 Wisdom Reloaded is rather a series of shaders I created during the transitional period from Wisdom V2RC2 to Wisdom V3. I'm not satisfied with Wisdom V2's look and feel, and Wisdom V2 is using aging technology and pipelines for a Minecraft shader. SSAO, crepuscular rays, HDR pipeline, and a more realistic water system has been experimented. Several other special experimental versions have been developed to test out features like ambient occlusion. I'm also practicing my artistic skills with this version of shaders. Although this shader does not look good in probably most of the scenarios, it's an important stepping stone to the next version of Wisdom.

Wisdom V3 preview is officially called V2.99-dev. This is where the majority of changes and features are brought to Wisdom Shaders. Wisdom shaders switched to a PBR lighting pipeline, and features such as bloom, PBR water are developed around the new PBR pipeline. HBAO also makes its way into the shaders, which is soon be replaced by Wisdom AO (which is an improvement on top of the basic idea of HBAO).

This version of Wisdom is extremely similar to the later Wisdom V3.1, but one more extremely important feature hasn't been added to the system, which later becomes the selling point of Wisdom.

A new water rendering system is introduced, accompanied with a new sky and a new color profile, Wisdom V3 stable 1 reaches an incredible state. However, I'm not satisfied with the current result and decided to reorganize the sky system and water system even more.

In the second preview of Wisdom V3 Stable 2, a much better Wisdom AO algorithm is added, together with more tweaks of water system. It does not stop there!

The Glory, The Monument: Wisdom V3.1

This is the first version of Wisdom that is published internationally and it is a huge success in the "history of Wisdom".

These videos sums up the glory of Wisdom V3.1 pretty well, no other words needed.

What about Wisdom V3.2, and what about the future? Well it's time for goodnight again. On the part 3 of this series, I will cover not only the development history of Wisdom shaders V3.2, but also the architectural details of the shaders and its pipelines, probably also the future of that shader. :D